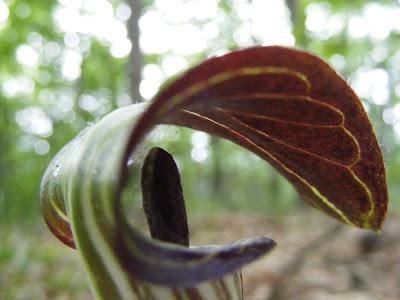 Preparing to depart Arizona, en route to Michigan, and thinking about spring wildflowers in the woods near home.
Posted by P. J. Grath at 3:41 PM 2 comments: 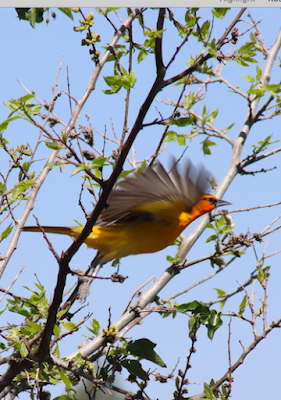 This is not the best image of a hooded oriole in terms of showing identifying marks, but I was very happy to catch the bird in flight. 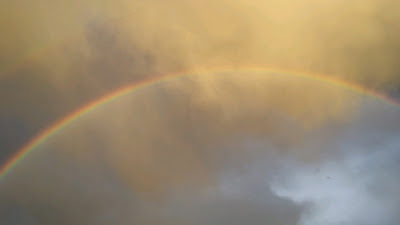 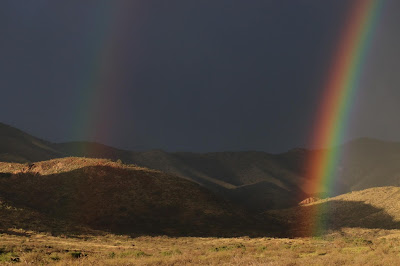 I don't know how wide an angle
it would have taken
to get both ends
of this rainbow
that arched
across the highway
in our little ghost town
last evening. 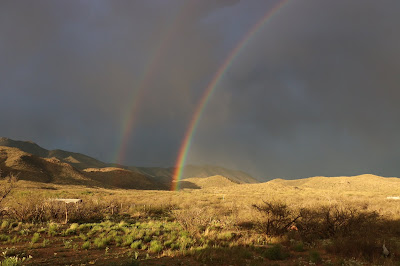 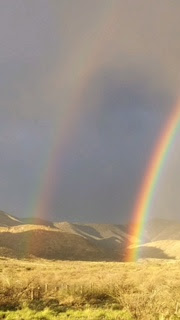 Discovering Jewels in the High Desert 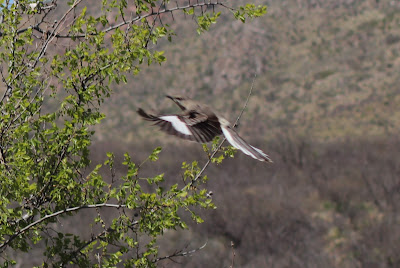 Handicapped early in life by nearsightedness and youthful impatience, I was never any kind of serious birder. Wildflowers hold still, allowing me as long as I need to gaze and consult a field guide, plants are more my speed than darting, swooping, here-then-gone-in-an-instant feathered things.

But the birding obsession comes on with advancing years, I’ve noticed. That is, I noticed it first in other people and now find myself succumbing in turn. Bird-watching, I guess, is kind of like bridge or golf that way (though I’m still holding the game and sport at bay, thank you): a pastime that seemed deadly boring for decades suddenly becoming all-absorbing. Nowadays, though not yet a maniac, whenever I can add a new species to the list of birds I’ve managed to identify, my “discovery” fills me with a little thrill of excitement.

Recently a little grey bird perched on a bare branch in the dry wash stopped me on my way to the mailbox and captivated me with a repeated tweet-tweet-tweet-tweet-bzzz. What was that bird? I posed the question to friends on Facebook, since I had no photo to compare to pictures in books and had only the remembered sound to associate with a “little grey bird.” Several people made suggestions, and by following up on one of them in particular I was able to find the black-tailed gnatcatcher online and listen to its song. That was it! My field guides could then fill in the details.

No telephoto lens: big handicap this year. Handicap I’ve been feeling for weeks and weeks — until I dug my camera carrying case out of the cupboard to retrieve the macro lens, thinking it would help with photographing tiny, tiny flowers. Lo and behold! It is a tele-macro lens! Perfect for the birds! 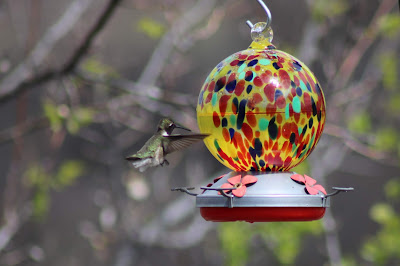 Small birds seem almost designed to chase away blues and cares. How on earth do hummingbirds survive? And with such élan? It’s inspiring.

The pyrrhuloxia, Arizona’s silver cardinal, has a call so much like the northern cardinal, familiar to me from Illinois and Michigan, that here in Arizona I have to look twice to see which cardinal is visiting. I learned about the pyrrhuloxia in 2015, but only this week have I been able to see (through the magic of the tele-macro lens) and thus identify the colorful little house finch and the ladder-back woodpecker. House finch, I think, should have a more exciting name, as a friend said to me years ago about the name of the state of Idaho, which probably made her think of potatoes. House finch makes me think of house sparrow, and — sorry! house sparrows, albeit cute in their way, are not exciting to me, for I’ve seen them all my life. Now the little ladder-back woodpecker — he is just plain cute, so much smaller than woodpeckers more familiar to me, with his little head ruffled up in the breeze. 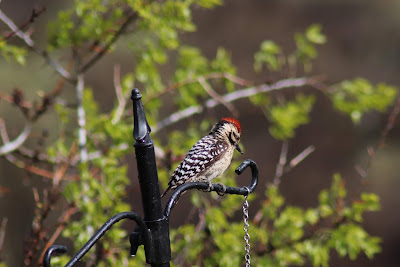 Other birds without brilliant colors make me smile, though. The canyon towhee, for example, is not a bird of vivid hues but makes up for drab coloration with personality — friendly, companionable, perky, and confident. The “most confiding” towhee, as one of my guides calls it, seems to invite something like friendship.

Then there is the mockingbird. Simple Puritan grey with white accents, it is an elegant, self-assured bird and the star vocalist among my avian acquaintance.

Though the little black-throated sparrow, dressed in black, grey, and white, also has a beautiful morning song. 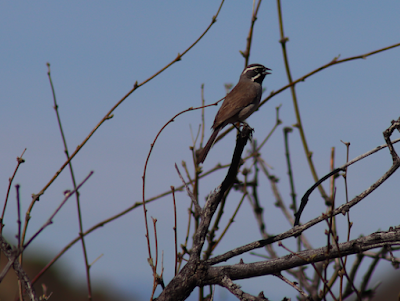 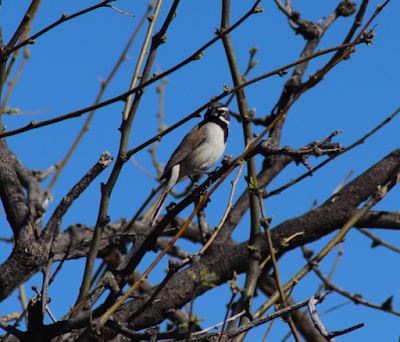 The black-throated sparrow, I may note here, is “Arizona’s most widespread and numerous breeding sparrow,” according to Birds of Southeastern Arizona, by Richard Cachor Taylor. And that’s all right. The description reassured me, the first time I found it, that I’m on the right track, too. It’s tempting for amateur naturalists to want to “discover” some rare species, but odds are that what we’re seeing most of the time is what is most common, and becoming familiar with as many of the common birds in an area as possible will make the less common stand out to the amateur eye as it gradually acquires knowledge.

I might as well throw the tiny flowers in here. My quest started with rattlesnake weed, so easily overlooked, so small in the vastness that you could walk all over it for years without seeing it, but once it catches your eye you see it everywhere, at least around Dos Cabezas.

Going back for camera and newly rediscovered lens and returning to photograph the rattlesnake weed, I found other tiny flowers I’d never seen before. (I've used a dime for indication of size.) I’ll have to go out again with that plant identification app on my phone can help me with these, because none of my wildflower guides seems to include them, probably guessing that no one would be noticing anything of that scale. 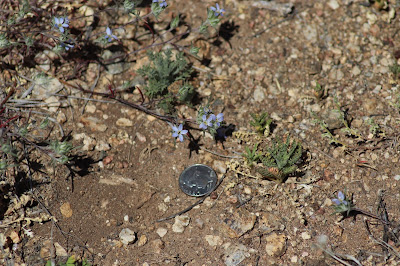 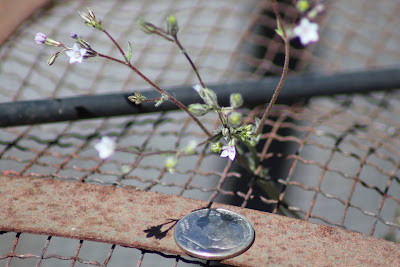 I brought the sprig of tiny white flowers back to the cabin to photograph them but was quickly distracted by a hooded oriole, the flashiest of birds visiting my feeders. If only he would be more accommodating about posing for me! But the oriole is not as “confiding” as the towhee or as self-assured as the mockingbird, and at the slightest rustle on my part, he is gone. I no longer suffer from youthful impatience, however; I’ll bide my time, and the oriole will return. Isn’t he worth waiting for?

Bless the Little Ones! 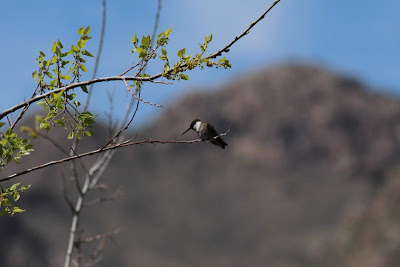 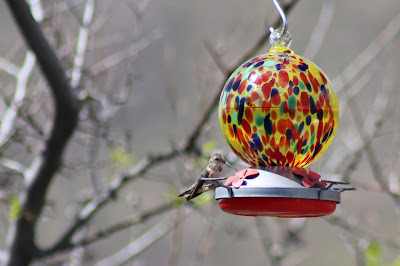 This is one of my favorite photos of Chris, because (1) he didn't know he was going to be part of the picture and because (2) he was always such a friend to insects and knew and appreciated them so well. His other loves are shown below, with my old friend in sharper focus. His knowledge and generosity were legendary.

Snowmelt from the Mountains 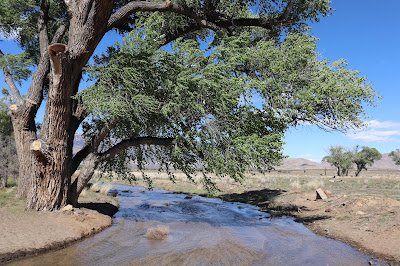 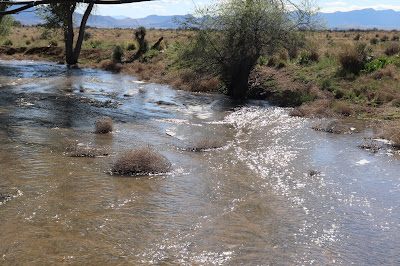 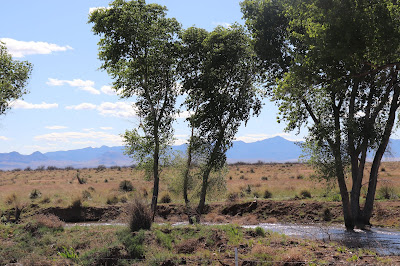 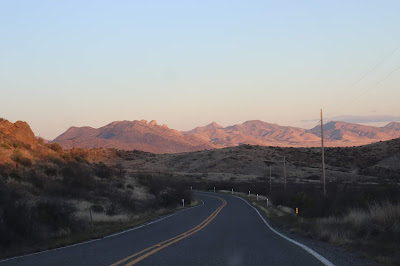 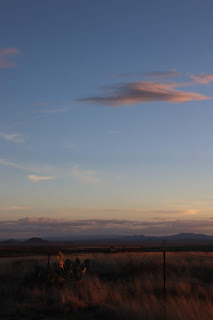 We have a favorite ride we often  take as day is winding down. It's our own highway, a road beautiful at any time of day (and I love it just as much in the morning light), but it is such a conveniently short distance from the cabin that we often drive a few miles after an early supper for a quiet, peaceful, and unobstructed view of sunset over mountains and desert.

Of course, it isn't only the sun setting in the west that captures the eyes of the Artist and the seasonally retired philosopher-bookseller. It is the light in all directions -- before, during, and after the sun has gone down. See how the last low light of day is reflected on the prickly pear cactus pads? And how it bathes the range in gold? 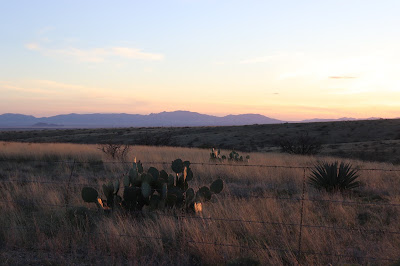 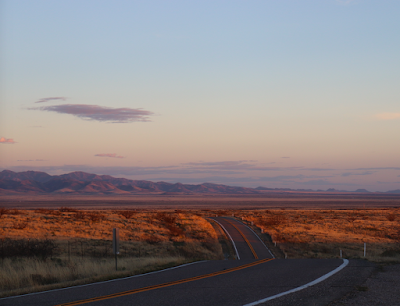 As the sun dips below the horizon (or as our portion of the earth turns away from the sun and toward the night), the clear desert sky turns from cool blue to blazing warm colors of the Western palette, and souls sigh in contentment. 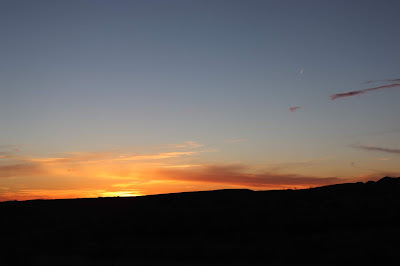 Every Day Begins and Ends Beautifully 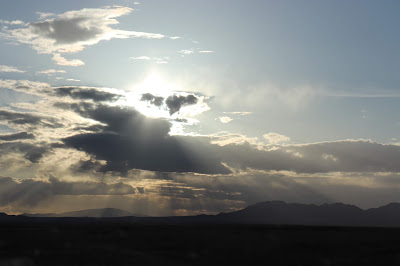